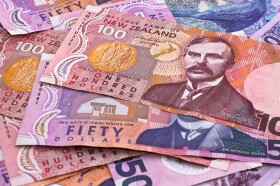 The New Zealand dollar was stable today. While it moved a little lower against some of its rivals, the kiwi for the most part did not go far from the opening level. Trading is going to be quieter than usual on Thursday and Friday due to the Thanksgiving holiday in the United States.
Statistics New Zealand reported that the trade balance logged a deficit of NZ$501 million in October, matching market expectations. The previous month’s deficit got a revision from NZ$1,017 million to NZ$1,025 million. Looking deeper into the report, the data was not particularly good as both imports and exports fell compared with the same month a year ago. Imports fell by 13%, while exports declined by 4.4%. Imports from all of New Zealand’s major trading partners decreased. Exports also fell for most destinations, except for the United States and the European Union.
Earlier this week, the New Zealand government asked the Reserve Bank of New Zealand to include house prices in their monetary policy considerations as the skyrocketing prices can lead to a housing bubble. The request led to a rally of the New Zealand currency as market participants believed that it will decrease the willingness of policymakers to cut interest rates into negative territory. Yesterday, RBNZ Governor Adrian Orr said that the central bank is considering reintroduction of loan-to-value ratios, which will limit the amount a person can borrow from a bank by the person’s income. Orr explained how the ratios can help to curb property speculation:

Well I think it’s important to understand the reason why we consider loan-to-value ratios. That is really about making sure there is not excess leverage or excess debt borrowing in the housing market because that’s where households — be they owner-occupiers or investors — can find themselves in trouble. More importantly, if banks are doing a lot of it, it becomes a very concentrated part of a bank loan book and that means if unemployment rose or interests rates increased and people can’t service that debt it becomes the banks’ problem and they have too much skin in the game. So we are saying to the banks if you can’t control your own portfolio we will put these constraints in there and you can blame us for not lending to people rather than your own appetite.