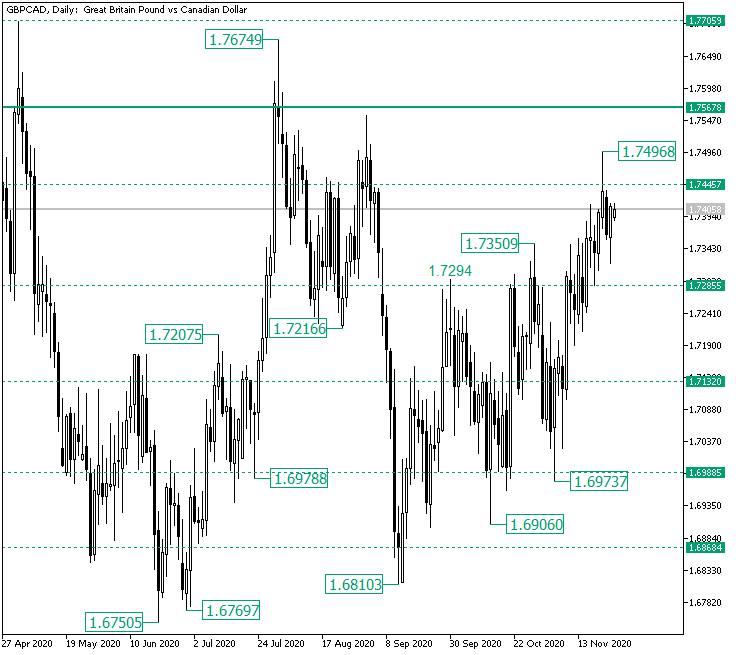 The Great Britain pound versus the Canadian dollar currency pair seems to be on its way to the main objective of 1.7567.
Long-term perspective
After the false piercing of the 1.7567 resistance, noted by the 1.7674 high, the price dropped until the 1.6810 low.
From there, an ascending movement took shape, as the series of higher lows and highs point out.
The fact that the bulls are willing to — and apparently accomplishing — wipe out the sharp decline that followed after 1.7567 was validated as resistance subsequent to the determined retracement on September 1 is clearly visible on the chart, as the 1.7496 high notes.
However, as, after the high, the price retraced under the intermediary level of 1.7445, the bears could argue the bulls are yet again out of steam.
Still, the drop from the 1.7496 high did not reach the 1.7285 intermediary support and, even more, seems to lack the power to do so, as it allowed the candle on November 25 to be a bullish one.
Nevertheless, even if the price reaches the 1.7285 level, the bulls could make a push towards 1.7445, which serves as a first profit booking area for them and, also, a level that they want to validate as support since once that happens, the path to 1.7567 is open.
On the other hand, if 1.7285 does cede, then 1.7132 gets exposed.