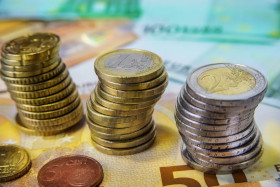 Euro Falls Against Dollar on Risk-Off Mood, Rallies on US Jobless Claims

The  euro today fell against the  resurgent dollar for  the  second consecutive day as  the  impasse regarding the  EU’s budget weighs down the  single currency. The  EUR/USD currency pair was also affected by  the  risk-off market sentiment as  investors bought the  safe-haven dollar as  the  second wave of  coronavirus infections intensifies.
The  EUR/USD currency pair today fell from a  high of  1.1852 in  the  early Frankfurt session to  a  low of  1.1816 in  the  middle of  the  session before recouping most of  its losses during the  American market.
The  currency pair’s initial decline was driven by  the  greenback’s rally as  tracked by  the  US Dollar Index, which hit a  high of  92.71 today. Coronavirus headlines including news that New York City was closing schools again after the  region’s COVID-19 test positivity rate surpassed 3%. News that Tokyo had raised its coronavirus alert levels to  the  highest possible levels as  daily infections stay above 500 also contributed to  the  pair’s decline. The  dovish speech by  the  ECB Governor Christine Lagarde where she emphasized that fiscal support for  the  euro area would be crucial in  future also drove the  pair lower.
The  release of  the  eurozone’s current account data which came in  at  â¬25.2 billion versus the  expected â¬28.6 billion surplus also drove the  pair lower. The  pair got some relief following the  release of  the  US initial jobless claims report, which was worse than expected.
The  currency pair’s future performance is likely to  be affected by  tomorrow’s German PPI and  eurozone consumer confidence prints.
The  EUR/USD currency pair was trading at  1.1848 as  at  17:30 GMT having risen from a  low of  1.1816. The  EUR/JPY currency pair was trading at  123.00 having fallen from a  high of  123.21.
If you have any questions, comments, or opinions regarding the Euro, feel free to post them using the commentary form below.