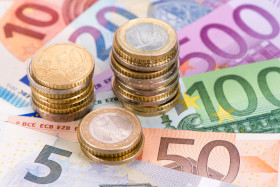 The  euro today rallied against the  dollar boosted by  the  positive investor sentiment despite the  rising coronavirus cases and  lockdown measures in  Europe. The  EUR/USD currency pair’s rally as  also fueled by  the  positive releases from across the  euro area including Germany’s inflation data among others.
The  EUR/USD currency pair today rallied from a  low of  1.1758 in  the  late Asian session to  a  high of  1.1823 in  the  mid-Frankfurt session before proceeding to  trade sideways up to  the  time of  writing.
The  currency pair rallied higher today reversing yesterday’s decline and  was booted by  the  release of  the  German inflation report for  October. According to  the  Federal Statistical Office, Germany’s CPI expanded 0.1% in October, translating to annualised -0.2%; both prints were in-line with expectations. The pair kept rallying following the release of the  European Central Bank’s latest economic bulletin. The  disappointing eurozone industrial production report for  October, which was lower than expected coincided with the  currency pair’s top. According to  Eurostat, the  region’s industrial production contracted 0.4% versus the  expected 0.7% expansion.
The  release of  the  upbeat US initial jobless claims report by  the  Department of  Labor, which came in  at  6.786 million versus the  expected 6.9 million caused the  pair to  trade sideways. The  dovish speech by  ECB Governor Christine Lagarde also contributed to  the  single currency’s stagnation.
The  currency pair’s future performance is likely to  be affected by  tomorrow’s eurozone GDP report and  US dollar dynamics.
The  EUR/USD currency pair was trading at  1.1802 as  at  17:44 GMT having dropped from a  high of  1.1823. The  EUR/JPY currency pair was trading at  124.17 having fallen from a  high of  124.50.
If you have any questions, comments, or opinions regarding the Euro, feel free to post them using the commentary form below.