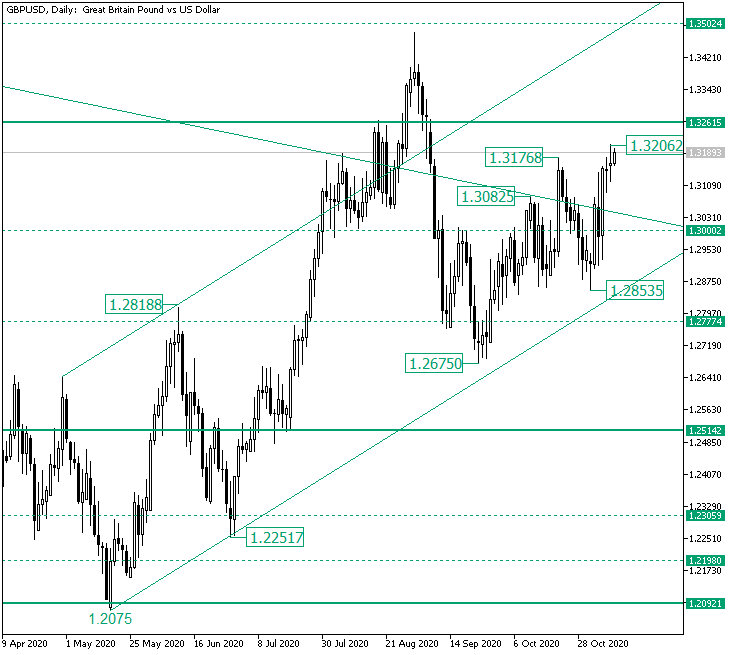 The Great Britain pound versus the United States dollar currency pair seems to aim for 1.3261. But do the bulls still have enough steam?

Long-term perspective
From the 1.2075 low, after validating the support area of 1.2092, the price started a very convincing ascending trend.
In fact, the bulls were so determined that they were able to pierce the triple resistance zone etched by the descending line, the upper one of the ascending channel, and the 1.3261 level.
But as this was an overextension, the movement was rendered as a false piercing, the result of which was a sharp decline, one that ran a little bit beyond the previous higher high, crafting the low at 1.2675.
However, the bulls were able to pull it off, crafting a rally that extended — in a first phase — until the 1.3167 high. From there, the bears attempted a takeover, sending the price to the 1.2853 low, but the bulls responded promptly, sending the price back up and taking out the 1.3176 high by pointing the 1.3206 higher high.
One possible outcome is for a short-time consolidation phase — such as a pennant or a flag — to take shape. If this happens, then 1.3261 is to be pierced and, if validated as support, aid to the continuation of the rally. In this case, 1.3502 is the main target — as well as 1.3400 and 1.3300, which are not highlighted on the chart.
Another possibility is for a deeper retracement to form, seeking to validate the double support defined by the 1.3000 psychological level and the falling trendline. Only a fall beneath this potential double support may trigger further decline.

Short-term perspective
The fall that came about after the resistance level of 1.3157 was validated as resistance extended until the 1.2853 low, just a little under the 1.2876 intermediate level.
From there, the price managed to climb back, hitting the high of 1.3207.
If the price consolidates around the 1.3207 level, then the bulls could trigger another rise, their objective being 1.3268.
On the flip side, if 1.3207 stays resistance, then the fall could prolong to 1.2983.