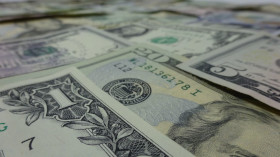 The US dollar is struggling to plug the hemorrhaging to finish the trading week. The greenback has been cratering against many of its major currency peers this week as a bit more certainty over the 2020 election result and a substantial rally in stocks sent the buck lower. With a better-than-expected October jobs report, is the dollar in store for greater losses in November?

According to the Bureau of Labor Statistics (BLS), the US economy created 638,000 new jobs in October, beating the market forecast of 600,000. The unemployment rate fell below 6.9%, beating the median estimate of 7.7%.
In September, 672,000 positions were created, and the jobless figure stood at 7.9%.
The biggest job gains were in leisure and hospitality (271,000), professional and business services (208,000), retail trade (104,000), and construction (84,000). Manufacturing payrolls also added 38,000. The largest contraction in employment occurred in government, with 268,000 lost jobs.
In other data, average hourly earnings rose 0.1% in October, average weekly hours were flat at 34.8, and the labor force participation rate edged up to 61.7%.
The American labor market continues to face challenges as only 12 million of the 22 million lost jobs in March and April have been recovered. The jobs market is relying on a new stimulus and relief package that could support millions of unemployed Americans and struggling businesses.
The October jobs report comes one day after the number of Americans filing for first-time unemployment benefits fell to a pandemic low of 751,000 in the last week.
Meanwhile, on Thursday, the Federal Reserve completed its two-day Federal Open Market Committee (FOMC) policy meeting. The US central bank left interest rates unchanged at 0.25%, while keeping its $150-billion-a-day quantitative easing efforts alive. While the Fed called on Congress to push ahead with fiscal tools, the Eccles Building confirmed that it had not run out of ammunition to support the economic recovery. Next month, 12 of the Fed’s facilities will expire, so the December FOMC meeting will be crucial for investors to monitor.
The financial markets wiped out their losses in pre-market trading following the release of the employment data, looking to extend their gains to close out the volatile trading week.
The US Dollar Index, which gauges the greenback against a basket of currencies, tumbled 0.25% to 92.29, from an opening of 92.57. The index is on track for a sharp weekly decline of 2%, bringing its year-to-date loss of 4.3%.
The USD/CAD currency pair rose 0.08% to 1.3055, from an opening of 1.3046, at 13:00 GMT on Friday. The EUR/USD advanced 0.46% to 1.1885, from an opening of 1.1830.
If you have any questions, comments, or opinions regarding the US Dollar, feel free to post them using the commentary form below.