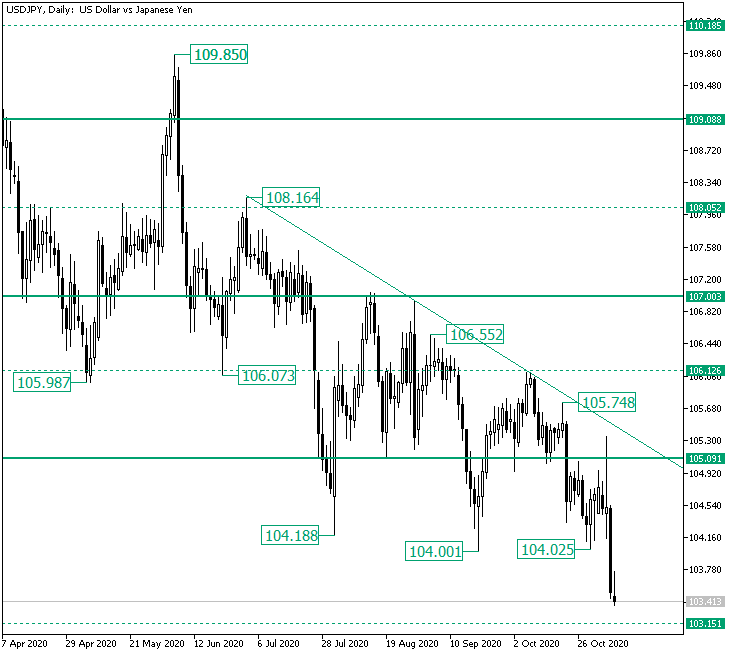 The United States dollar versus the Japanese yen currency pair seems to have been taken over by the bears. Do the bulls still hold any chances?

Long-term perspective
The high of 109.85 spawned a depreciation that, besides rendering the piercing of 109.08 as a false one, managed to pierce the next firm support, the psychological level of 107.00.
The piercing was limited by the 106.12 intermediary level, which — after printing the 106.07 low — sent the price back above 107.00, crafting the high of 108.16.
However, the 108.16 high was the limit of the appreciation, as what followed was a convinced depreciation that extended until the low of 104.18, under the important level of 105.09.
Even if the bulls recovered, they were not able to get above the double resistance etched by the descending trendline and the 107.00 level. This produced the lower low of 104.00, which allowed an appreciation to yet another double resistance, this time defined by the 106.12 intermediary level, alongside the same descending trendline.
The history repeated itself, as the price was not able to sustain the gains won after the rise from the 104.02 low. Thus, the validation of 105.09 as resistance allowed the bears to gain ground, getting the price closer to the 103.15 intermediary level.
If the bulls can bring the price above the 104.02 low, then they have another shot for the double resistance outlined by the descending trendline and 105.09. If they pull it off, then 106.12 is their next objective.
However, if 104.02 is not challenged, then 103.15 is just a matter of time.

Short-term perspective
The descending trend that started from the 106.10 high, after the 106.02 level was validated as resistance, extended — as shown by the third lower low — until the 104.02 low.
From there, a new correction emerged, one that validated the upper line of the channel and the 105.27 intermediary level. This led to a new impulsive swing.
The new swing pierced the level of 104.44 and printed a new lower low, with respect to 104.02. But aside from that, it also pierced the lower line of the channel.
In this context, one possible scenario is for a short-lived consolidation pattern — such as a pennant or a flag — to take shape, targeting the 103.09 intermediary level.
On the other hand, if the price returns inside the channel, then 104.44 could be not only a bullish target but also a motive for the bulls to try and extend until 105.27.