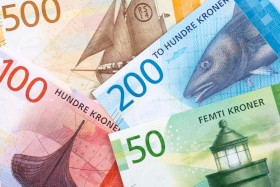 The Norwegian krone climbed against the US dollar and the euro today after Norway’s central bank decided to left the policy rate unchanged. The drop in crude oil prices and new measures to halt the COVID-19 spread may yet hurt the currency but so far it is trading above the opening level.
The Norges Bank announced on Thursday that it has decided to leave its key interest rate at 0%. The statement talked about the negative impact of the coronavirus pandemic on the economy:

The Norwegian economy is in the midst of a deep downturn. So far, economic developments have largely been in line with the projections in the September Report. Activity has picked up further, but the level is still lower than prior to the pandemic. Unemployment has declined, but remains high. Increased Covid-19 infection rates and more containment measures abroad and in Norway will likely put a brake on the upswing in the coming period.

As for its plans for the future, the central bank mentioned that it predicted in September that interest rates will remain at the current ultra-low levels for at least a couple of years, and added:

In the Committee’s assessment, the sharp economic downturn and considerable uncertainty surrounding the outlook suggest keeping the policy rate on hold until there are clear signs that economic conditions are normalising.

Talking about the pandemic, Norway announced that it is preparing to implement additional restrictions aimed at preventing further spread of the virus. While the government wants to avoid a full lockdown, the planned measures will nevertheless encourage citizens to stay home and leave only in case of extreme necessity. Norwegian Prime Minister Erna Solberg explained the decision:

We do not have time to wait and see if the measures we introduced last week are sufficient. We must act now to avoid a new shutdown.