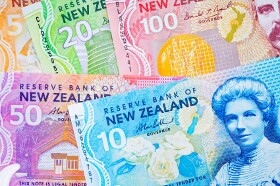 The New Zealand dollar rallied against major currencies today, though was unable to beat its commodity-linked counterparts. Market analysts explained the rally by the sharp rebound of crude oil prices after an intraday decline. Positive macroeconomic data from New Zealand itself and the country’s biggest trading partner, China, was also supporting the kiwi.
Over the weekend, China released reports on the manufacturing and services industries in October. Both indicators were little changed from the previous month and in line with market expectations. But the situation with the private report from Markit released today was different. Experts were anticipating a mild decline of the Caixin China Manufacturing PMI from 53.0 in September to 52.9 in October. Instead, the index climbed to 53.6. The report commented on the result:

The reading signalled a marked improvement in business conditions that was the strongest since January 2011. The headline PMI has pointed to an improvement in the health of the sector for each of the past six months.

Data in New Zealand itself was not bad either as a report from Statistics New Zealand showed that the seasonally adjusted number of new dwelling consents increased by 3.6% in September from August, sharply accelerating from the previous month’s 0.2% rate of growth. Year-on-year, the indicator rose by 3.5%.
NZD/USD rose from 0.6604 to 0.6622 as of 17:04 GMT today. EUR/NZD declined from 1.7605 to 1.7564, retreating from the daily high of 1.7661. At the same time, AUD/NZD edged up from 1.0619 to 1.0628.
If you have any questions, comments, or opinions regarding the New Zealand Dollar, feel free to post them using the commentary form below.