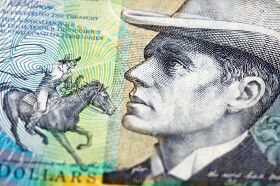 The Australian dollar was the second strongest currency on the Forex market today, losing only to the Canadian dollar. The Aussie rallied for the same reasons as the New Zealand dollar: the rebound of crude oil prices, good economic data in China, decent domestic macroeconomic reports.
The Australian Industry Group Australian Performance of Manufacturing Index climbed from 46.7 in October to 56.3 in November. Being above the neutral 50.0 level, the index suggests that the sector returned to growth for the first time since July. The report commented on the result:

Respondents across all sectors noted a jump in sales and new orders as a result of pent up demand from the initial activity restrictions. The jump into expansion was driven by large improvements in New South Wales, which rose into expansion, and Victoria, which remained in contraction but improved from a deep contraction in September.

The Melbourne Institute Inflation Gauge fell by 0.1% in October after rising at the same rate in the previous month. The ANZ job advertisements climbed by 9.4% in October from the previous month, though they remained 13.5% below the February pre-pandemic levels. The Australian Bureau of Statistics reported that the seasonally adjusted number of building approvals climbed by 15.4% in September from the previous month — ten times the forecast amount. The Index of Commodity Prices reported by the Reserve Bank of Australia fell by 0.3% in October from the previous month, led by natural gas, coal, and crude oil prices.
The RBA will make a monetary policy announcement tomorrow. The general consensus is that the central bank will cut interest rates.
AUD/USD rose from 0.7021 to 0.7037 as of 18:11 GMT today. EUR/AUD declined from 1.6572 to 1.6518, retreating from the daily high of 1.6633. AUD/CAD opened at 0.9344, rallied to the daily maximum of 0.9372 but retreated to 0.9330 later.
If you have any questions, comments, or opinions regarding the Australian Dollar, feel free to post them using the commentary form below.