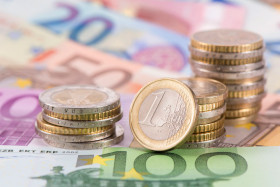 The  euro today rallied against the  US dollar despite the  release of  mixed macro prints from across the  euro area driven by  the  resurgent investor risk appetite. The  EUR/USD currency pair’s rally was also boosted by  the  greenback’s selloff, which started yesterday amid hopes of  a  US coronavirus stimulus package.
The  EUR/USD currency pair today rallied from a  low of  1.1665 in  the  early Frankfurt market to  a  high of  1.1743 in  the  American session and  was trading near these highs at  the  time of  writing.
The  currency pair’s rally was driven mostly by  positive investor sentiment despite existing concerns about the  rising coronavirus cases. The  release of  upbeat Spanish flash consumer price index report for  September by  the  National Institute of  Statistics also boosted the  pair. The  positive Italian producer price index report released by  Istat also lifted the  single currency. The  fibre’s positive momentum was further strengthened by  the  positive eurozone economic sentiment and  business climate indicator released by  the  European Commission.
The  disappointing German flash consumer price index report released by  the  Federal Statistical Office did not affect the  pair’s rally. The  release of  the  US goods trade balance report by  the  Bureau of  Economic Analysis had a  muted impact on  the  pair, which kept rallying.
The  currency pair’s future performance is likely to  be affected by  tomorrow’s German retail sales and  unemployment reports.
The  EUR/USD currency pair was trading at  1.1742 as  at  18:40 GMT, having rallied from a  low of  1.1665. The  EUR/JPY currency pair was trading at  124.09, having risen from a  low of  123.03.
If you have any questions, comments, or opinions regarding the Euro, feel free to post them using the commentary form below.