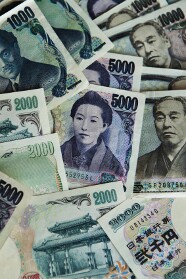 The Japanese yen is extending its winning streak against many of its most traded currency counterparts on Thursday. The yen found support in the central bank leaving interest rates in subzero territory and keeping its bond-buying program. In addition to the ultra-loose efforts of the Bank of Japan (BoJ), the institution plans to coordinate with new Prime Minister Yoshihide Suga on a wide range of policies.

Governor Haruhiko Kuroda and his colleagues voted to keep its benchmark short-term rate at -0.1% and leave the 10-year Japanese bond yield at around 0%. Japanese policymakers upgraded their economic forecasts, noting that conditions are “severe,” but business activity is recovering. This is a modified language from last monthâs âextremely severe stateâ comments.
For now, the BoJ will continue to monitor the effects of the coronavirus pandemic. But it added that it would not hesitate to take employ âadditional measures if necessary.â

Japan’s economy has started to pick up with economic activity resuming gradually, although it has remained in a severe situation due to the impact of the novel coronavirus at home and abroad.

In the July quarterly report, the BoJ projected that the worldâs third-largest economy would contract 4.7% in the year to March 2021 after sliding 7.9% in the second quarter. Although uncertainty continues to plague the economy and the broader financial markets, the central bank is anticipating a recovery in 2021 and 2022.
Meanwhile, Kuroda confirmed that the central bank plans to coordinate with new Prime Minister Yoshihide Suga, who officially succeeded Shinzo Abe after the Japanese parliament elected Suga. Early reports indicate that not much would change with Suga at the helm, and Suga has stated that he intends to pursue the objectives of Abenomics.

The BOJ will continue to solidly cooperate with the government as it manages policy. The need for deregulation is widely recognized and the BOJ stands ready to continue to provide a sort of safety net through monetary easing.

The announcement came hours after the Federal Reserve left interest rates unchanged near zero, pledging to keep rates low for years to come.
Earlier this week, trade numbers were published, and they did not put a positive spotlight on the Japanese recovery. In August, exports slumped 14.8%, while imports cratered 20.8%. In July, industrial production fell at an annualized rate of 15.5%, but capacity utilization did rebound 9.2%. Foreign bond investment and stock investment by foreigners both dipped in the week ending September 12.
Inflation and purchasing managersâ index (PMI) data will next be released.
The USD/JPY currency pair tumbled 0.23% to 104.71, from an opening of 104.95, at 14:10 GMT on Thursday. The EUR/JPY dropped 0.27% to 123.68, from an opening of 124.01.
If you have any questions, comments, or opinions regarding the Japanese Yen, feel free to post them using the commentary form below.