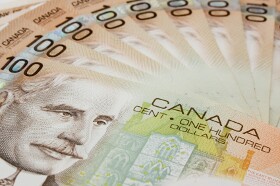 The  Canadian dollar today surged against its US peer as  the  latter eas reeling from yesterday’s speech by  the  Fed Chair Jerome Powell, which unveiled a  new inflation policy. The  USD/CAD currency pair today fell for  the  fourth consecutive session to  lows last seen in  January as  the  greenback remained under intense selling pressure.
The  USD/CAD currency pair today fell from an  opening high of  1.3132 during the  Australian session to  a  low of  1.3047 in  the  early American market before recouping part of  its losses.
The weak greenback fueled the currency pair’s decline after Jerome Powell’s speech unveiling a  new inflation policy triggered an  exodus out of  the  dollar. The  commodity-linked loonie was barely affected by  the  range-bound crude oil prices as  tracked by  the  West Texas Intermediate. The  pair recouped its losses after the  release of  Canada’s Q2 GDP report, which was slightly better than expected. According to  Statistics Canada, the  country’s GDP contracted 38.7% versus the  expected 39.6% decline.
Several macro releases from the  American docket also boosted the  pair, including the  mixed US personal consumption expenditures report. According to  the  Bureau of  Economic Analysis, the  core US PCE print came in  at  1.3% versus the  expected 1.2%. The  upbeat University of  Michigan consumer sentiment index for  August also contributed to  the  pair’s recovery.
The  currency pair’s performance over the  upcoming weekend is likely to  be affected by  crude oil prices and  US dollar dynamics.
The USD/CAD currency pair was trading at 1.3096 as at 14:46 GMT, having risen from a low of 1.3047. The CAD/JPY currency pair was trading at 80.42, having fallen from a high of 81.58.
If you have any questions, comments, or opinions regarding the Canadian Dollar, feel free to post them using the commentary form below.