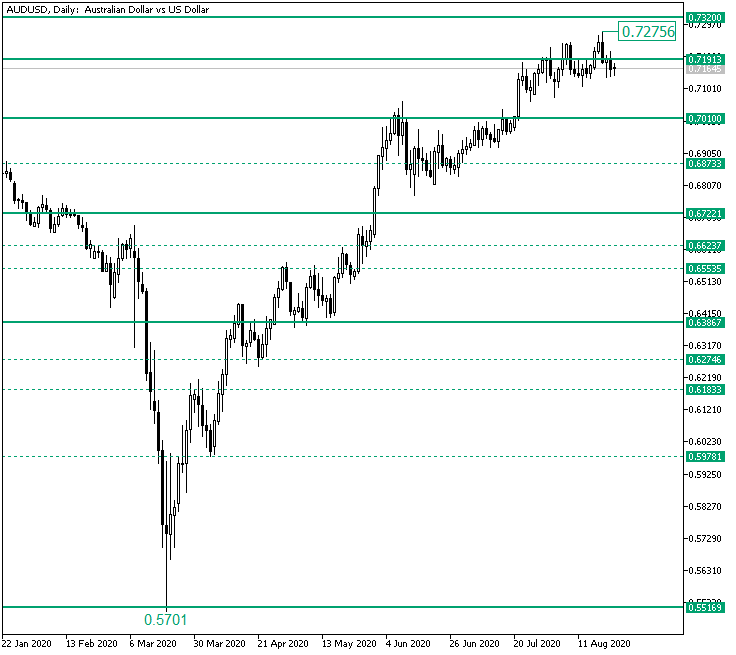 The Australian versus the US dollar currency pair seems to be making appreciation attempts in vain, as each of them is immediately met by a decisive retracement.

Long-term perspective
The rally from the 0.5701 low manged to extend until the 0.7275 high. However, as can be seen on the chart, the latter part of the ascending trend is losing steam.
This lack of bullish determination is pointed out by the behavior that came after the piercing of the important 0.7010 resistance. That is because instead of a sustained appreciation, the price rallied until 0.7191, from where — since the end of June — began almost a sideways movement, thus sending the message that it cannot pass this firm area.
The last attempt, the pin-bar on August 20, rather than causing a bullish force show-off, was invalidated by the candle on August 21.
So, as long as the bulls fail to conquer 0.7191, the bears — sooner or later — may take hold of the situation and drive the price towards the next potential supportive area, 0.7010. From here, the bulls could regroup to start a new endeavor towards higher prices. But on the flip-side, if 0.7010 is validated as resistance, then the bears can then cause further depreciation, 0.6722 being their next target.
On the other hand, if the bulls manage to stand this bearish pressure, and confirm 0.7191 as support, then they could reach 0.7320.

Short-term perspective
The rise that started from the 0.6972 low extended until the 0.7275 high. Even if the market is printing higher lows and higher highs, the difference between them is not significant enough for a wealthy appreciation to be seen on the chart.
If the bulls — at least — keep their current pace, they could confirm 0.7170 as support, which, if they do, opens the door to piercing and validating 0.7236 as support.
But if 0.7170 is confirmed as resistance, then the bears could send the price first towards the 0.7081 intermediary level, and then — if 0.7081 fails to serve as support — to the firm 0.7002 area.