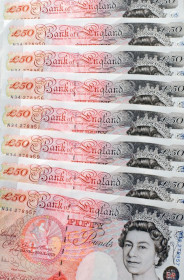 Sterling Pound Crashes Against the Dollar as Risk Appetite Dissipates

The  Sterling pound today crashed against the  US dollar as  investor sentiment turned decisively bearish favouring the  safe-haven greenback, which rallied. The  GBP/USD currency pair today fell despite the  release of  upbeat UK retail sales data earlier in  the  session as  investors fled riskier assets, including equities.
The  GBP/USD currency pair today fell from a  high of  1.3255 in  the  early London session to  a  low of  1.3059 during the  American market losing over 190 pips in  the  process.
The  currency pair’s declined coincided with the  greenback’s recovery as  tracked by  the  US Dollar Index, which rallied after hitting a  low of  92.58 earlier today. The  release of  the  upbeat UK retail sales report for  July by  the  Office for  National Statistics had a  muted impact on  the  pair. Even though both the  headline and  core prints beat expectations, the  release of  the  Markit/CIPS flash UK Manufacturing, and  Services PMIs also could not stop the  pair’s decline. The  services PMI came in  at  60.1 versus the  expected 57, while the  manufacturing PMI was 55.3 versus consensus estimates of  53.8.
Michel Barnier‘s speech saying that the  latest round of  Brexit talks had yielded no progress, and  the  confirm’s by  the  UK’s David Frost also drove the  pair lower. The  release of  the  upbeat Markit flash US Manufacturing and  Services PMIs during the  American session contributed to  the  pair’s decline.
The  currency pair’s performance over the  upcoming weekend is likely to  be affected by  geopolitical events.
The GBP/USD currency pair was trading at 1.3078 as at 17:51 GMT, having crashed from a high of 1.3255. The GBP/JPY currency pair was trading at 138.42, having fallen from a high of 139.95.
If you have any questions, comments, or opinions regarding the Great Britain Pound, feel free to post them using the commentary form below.