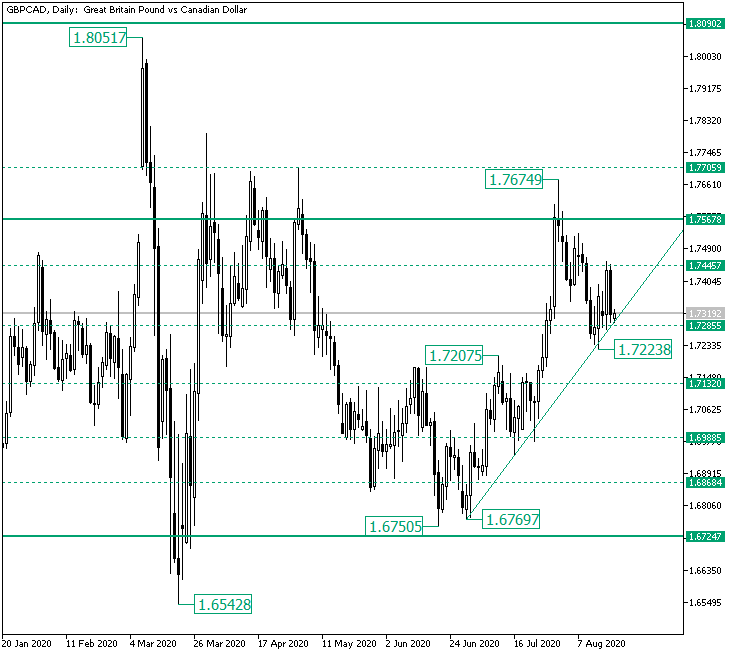 The Great Britain pound versus the Canadian dollar currency pair seems to be having a hard time making new gains. Are the bears that determined?

Long-term perspective
The rally from the 1.6542 low got stopped in its tracks by the firm 1.7567 resistance level. As a result, the price began a depreciation phase, one that brought it at the 1.6724 support.
From the 1.6769 low, the bulls started a rally that looked pretty promising. However, it seems that the same 1.7567 resistance area is to be blamed for yet another appreciation attempt being dismounted.
The tale-telling signs of the fact that the bulls were overwhelmed by the 1.7567 level are, first of all, the 1.7674 high, which plays the role of a false piercing, and secondly, the fact the rise that commenced from 1.7223 — after the double support formed by the ascending trendline and the 1.7285 intermediary level was confirmed — stopped at the 1.7445 intermediary level and got invalidated by the strong bearish candle printed on August 19.
In this context, if the double support gives way and 1.7285 turns resistance, then the fall could continue, heading for 1.7132 and 1.6988. However, if the bulls are able to make a comeback and validate the double support (even if that takes the shape of a false piercing), then they could challenge 1.7445 and 1.7567 once more.