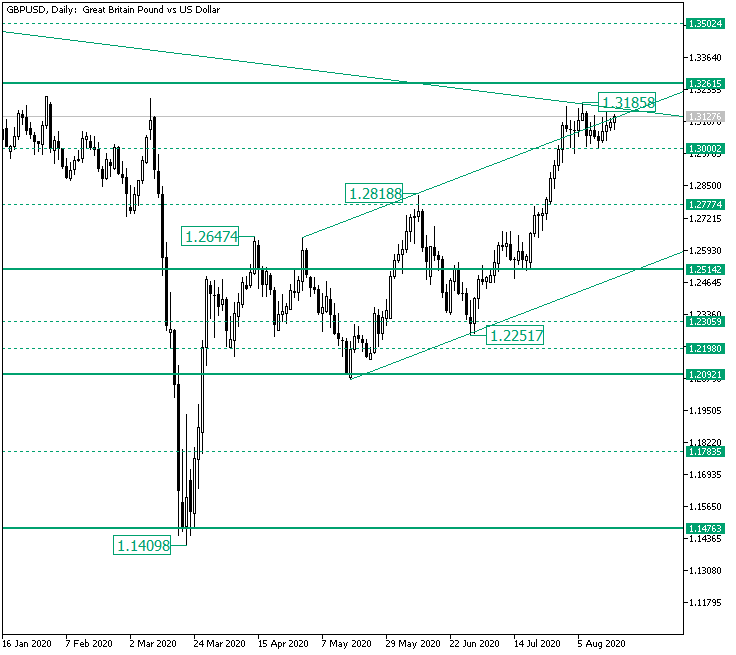 The Great Britain pound versus the United States dollar currency pair seems to be dominated by the bulls, but are they still capable of pushing the price higher?

Long-term perspective
After the pause that followed the rally from the 1.1409 low, the bulls searched for a support level to start a new movement from. They found it at 1.2092. From there, a new ascending trend commenced, one that extended until the 1.3185 high.
In doing so, the price extended beyond the resistance line of the ascending channel. This could have been a sign of overextension from the bulls’ side and it is usually succeeded by a movement towards the opposite line — in this context, a depreciation towards the lower line of the channel should have been expected.
However, the price found support in the intermediary — and psychological — level of 1.3000. But there is still one boundary that the bulls must overcome to be able to go about their plan: invalidating the resistance line that starts from the 1.4376 high and continues thru 1.3514. If they manage to, then 1.3261 is their first target, which, if conquered, opens the door to 1.3504. So, as long as the 1.3200 level remains viable, the bullish scenario can come into play.
On the flip side, if 1.3200 is pierced and confirmed as resistance, then the bears could drive the price until the 1.2777 intermediary level.

Short-term perspective
After the symmetrical triangle, the price appreciated, passing 1.2783 with ease, capturing 1.2983, and finding resistance at the 1.3175 firm resistance level.
So, for the time being, the price is limited by a flat, defined by 1.2983 and 1.3175, respectively. Being a continuation pattern, and also preceded by an appreciation, the flat is expected to allow the price to continue appreciating. As a consequence, as long as 1.2983 remains support, the bulls can try to pierce 1.3175, which, if it cedes, opens the path to 1.3268.
Only 1.2983 becoming resistance may allow the bears to send the price to 1.2876 in the first run and 1.2783 later on.