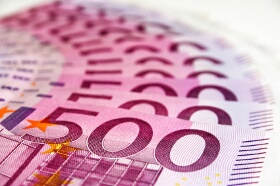 Euro Falls Then Rallies Based on US Dollar Dynamics and Sentiment

The  euro today fell against the  US dollar earlier in  the  session before rallying higher later with its movements primarily driven by  the  greenback’s price dynamics. The  EUR/USD currency pair’s was further encouraged by  the  positive investor sentiment around the  â¬750 billion EU recovery fund, which was agreed on  by  European leaders at  their summit.
The  EUR/USD currency pair today fell to  a  low of  1.1540 in  the  mid-European session before rallying to  a  high of  1.1626 in  the  American market before giving up most of  its gains to  trade almost flat at  the  time of  writing.
The  currency pair’s performance today was the  mirror opposite of  the  dollar as  tracked by  the  US Dollar Index. The  pair fell as  the  dollar rallied despite the  release of  the  positive German GfK consumer confidence survey, which came in  at  -3.0 versus the  expected -5. The  single currency did not rise on  the  upbeat speech given by  the  European Central Bank‘s Vice President Luis De Guindos who said that the  bank intends to  purchase â¬120 billion of  Spanish government debt.
The  pair later reversed course and  headed higher as  the  greenback fell. The  release of  weak flash eurozone consumer confidence print for  July by  the  European Commission did not derail the  single currency’s rise. However, it trimmed its gains later as  the  greenback recovered and  rallied yet again.
The  currency pair’s future performance is likely to  be affected by  tomorrow’s Markit PMI releases from both the  European and  US dockets.
The EUR/USD currency pair was trading at 1.1594 as at 20:14 GMT, having rallied from a low of 1.1540. The EUR/JPY currency pair was trading at 123.88, having risen from a low of 123.70.
If you have any questions, comments, or opinions regarding the Euro, feel free to post them using the commentary form below.