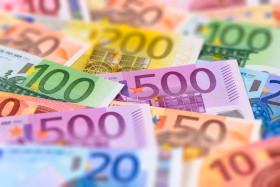 Euro Falls Against US Dollar Due to Quarterly/End-Month Outflows

The euro today fell against the US dollar earlier in the session and was on track to book a loss for the second straight session as the greenback rebounded. The EUR/USD currency pair sold off amid end of month/quarter outflows in favour of the dollar, which could see the pair close lower for the month.
The EUR/USD currency pair today fell from an opening high of 1.1043 to a low of 1.0926 but had recovered most of its losses at the time of writing.
Most analysts attributed the pair’s losses over the past two days to profit-taking by institutions traders who had booked significant profits from the pair’s rally over the previous six sessions. The release of weak German import price index for February by the Federal Statistical Office contributed to the pair’s woes. The country’s import prices contracted 0.9% in February against consensus estimates of a 0.3% decline. The release of the positive French consumer price index by Insee shortly afterwards did not help the pair. The pair also had a muted reaction to Germany’s upbeat March unemployment figures despite the print remaining stable at 5% beating expectations of a 0.1% expansion.
The weak preliminary European inflation data for March released by Eurostat also drove the pair lower. The pair recovered in the American session as the US Dollar Index fell to a low of 98.99 fueling the euro’s gains. The upbeat ISM Chicago business barometer also had a muted impact on the pair.
The currency pair’s future performance is likely to be affected by geopolitical events and tomorrow’s multiple Markit PMI releases.
The EUR/USD currency pair was trading at 1.1012 as at 19:11 GMT having risen from a low of 1.0926. The EUR/JPY currency pair was trading at 118.57 having dropped from a high of 119.71.