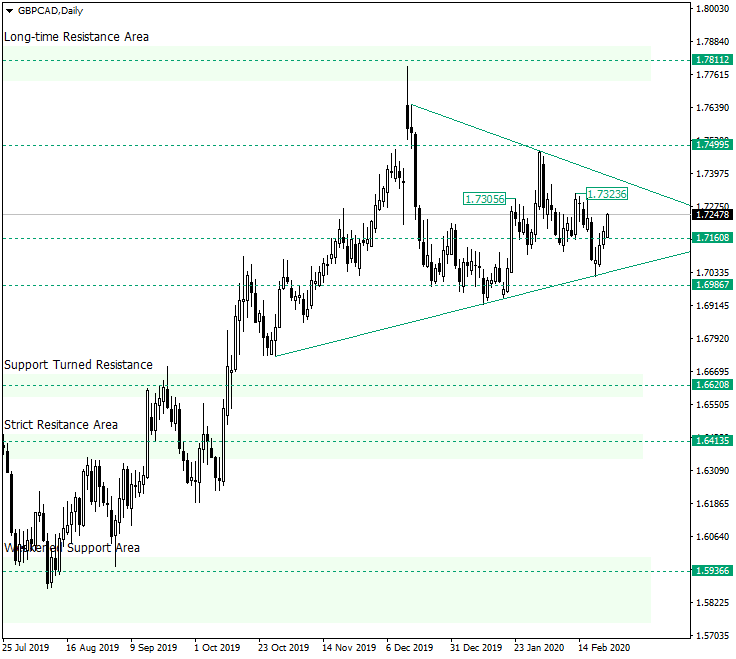 Bulls Back in Business on GBP/CAD?

The Great Britain pound versus the Canadian dollar currency pair made a twist.

Long-term perspective
The head and shoulders pattern seems to have been invalidated, as the price went back above the neck-line of the chart pattern, 1.7160, respectively.
The most probable culprit is the support trendline o what becomes a well-formed symmetrical triangle. On February 20, the price stopped exactly in this trendline.
The confirmation that followed caused a strong rise, the price piercing the resistance of 1.7160 and departing from it sufficiently enough so that the invalidation of the head and shoulders would be clear.
In such a context, one possible scenario is that the price makes a throwback towards 1.7160, to confirm it as support.
With or without the throwback, the bulls can march on towards the high of 1.7323, which is the first profit booking area, the second one being represented by the resistance trendline of the symmetrical triangle.
Of course, as the symmetrical triangle is a continuation pattern, thus usually continuing what preceded it, and as the strucutre before it is an appreciation (see the ascending movement that began after 1.5936 was confirmed as support), the expected outcome is for the resistance trendline to be pierced, targeting 1.7499.
This piercing could happen with the occasion of the current rise, or after another downwards leg, but as long as the chart pattern stays healthy, this is the expected outcome. Only if 1.6986 gets confirmed as resistance, then it can be considered that the bears are in control.

Short-term perspective
After falsely piercing the support of 1.7130, and printing the low of 1.7020, the price started a rally.
The price can retrace a little from 1.7288, thus giving the bulls better prices to long. Another possibility is for 1.7288 to be pierced and confirmed as support, an unfolding that would target the next resistance, 1.7383, respectively.
If 1.7383 gets taken out, then the door for the next resistance level, 1.7481, is open.