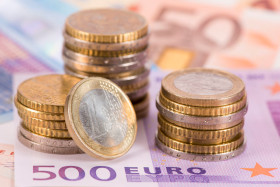 The euro today continued to trade near 3-year lows against the US dollar after the release of mixed GDP data from Germany and the greater euro area. The EUR/USD currency pair extended its losing streak, which has been in place since the start of the year, as the risk-off sentiment dominated the  markets in  the  face of  the  coronavirus outbreak.
The  EUR/USD currency pair today traded in  a  tight range between a  high of  1.0850 and  an  Asian session low of  1.0827 and  was trading within this range at  the  time of  writing.
The  currency pair traded with little conviction since the  start of  today’s session as  Asian traders kept away from the  pair as  they awaited the  European GDP releases. The  release of  the  preliminary German Q4 GDP report by  the  Federal Statistical Office had a  muted impact on  the  currency pair given the  mixed figures. The  quarterly GDP print disappointed by  remaining flat instead of  the  expected 0.1% expansion, while the  annualised print beat consensus estimates. The  release of  the  mixed flash eurozone Q4 GDP print by  Eurostat caused the  pair to  retreat slightly. The  quarterly print met expectations set at  0.1%, while the  annualised figure missed analysts estimates.
The  upbeat eurozone trade balance data for  December released by  Eurostat could not lift the  pair. The  euro area recorded a  trade surplus of   â¬23.1 billion beating analysts estimates of   â¬21.4 billion. Eurozone employment also ticked up 0.3% in  Q4 versus the  expected 0.1% print revealing a  strong labour market.
The  currency pair’s short-term performance is likely to  be affected by  the  release of  US retail sales and  geopolitical events.
The  EUR/USD currency pair was trading at  1.0843 as  at  11:15 GMT having rallied from a  low of  1.0827. The  EUR/JPY currency pair was trading at  119.06 having risen from a  low of  118.87.