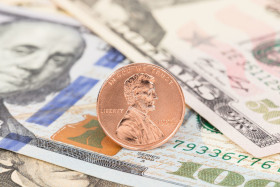 The US dollar is trading modestly lower on Tuesday as Federal Reserve Chair Jerome Powell testified in front of lawmakers. The greenback is also heading lower on mixed economic data that showed a tightening labor market but growing business optimism. Despite the greenback taking a breather, the buck is still enjoying a strong start to 2020.

During his semi-annual appearance in front of the House Financial Services Committee, Powell stated some of the elements that contributed to the slowdown in economic growth have eased. However, he did warn that risks to the US and global economy remain high as the negative effects of the Wuhan coronavirus outbreak could travel beyond the borders of China.
Powell noted that the central bank is âclosely monitoring the emergence of the coronavirus.â
Meanwhile, the head of the Fed assured members of Congress that the US financial system remains âstrong.â Despite the Fed bailing out the repo markets with tens of billions of dollars with liquidity injections, Powell does not think the turmoil in short-term money markets is a symptom of something greater in financial markets. He revealed that he is more concerned about cybersecurity threats than bad loans.
The Fed Chair further pointed out that wages are rising at the bottom end of the wage scale. Powell added that the strategy of waiting for the benefits from an 11th straight year of expansion to transfer to the poor is ânot good enough.â
Powell will appear before the Senate Banking Committee on Wednesday.
While it was a more neutral and subdued hearing, not everybody was enthusiastic over Powellâs testimony. President Donald Trump tweeted:

When Jerome Powell started his testimony today, the Dow was up 125, & heading higher. As he spoke it drifted steadily downward, as usual, and is now at -15. Germany & other countries get paid to borrow money. We are more prime, but Fed Rate is too high, Dollar tough on exports.

Powell was asked about the tweet, and he noted that he is not paying attention to the presidentâs tweets.
On the data front, the National Federation of Independent Business (NFIB) optimism index surged from 102.7 in December to 104.3 in January. This beats the median estimate of 103.4. The index has stayed above the 100 threshold since 2017 and is hovering around the best level since the end of the 2003 recession.
In December, job openings slumped 364,000 to 6.423 million, down from a revised 6.787 million in November. This is the second consecutive month the reading has slipped below the seven-million mark and also fell short of the forecast of seven million. Analysts are warning that the labor market could be tightening and that the jobs boom might be subsiding.
Does the market anticipate a cut to interest rates anytime soon? According to the CME Group FedWatch tool, investors are not penciling in any easing until the Federal Open Market Committee (FOMC) meeting in September.
The US Dollar Index shed 0.09% to 98.75, from an opening of 98.86, at 17:31 GMT on Tuesday. So far this year, the greenback has advanced 2.5%.
The USD/CAD currency pair declined 0.19% to 1.3292, from an opening of 1.3319. The EUR/USD rose 0.06% to 1.0918, from an opening of 1.0913.