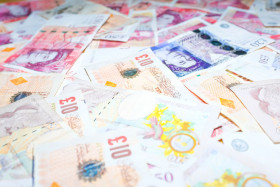 The Great Britain pound was about flat against other major currencies and trimmed losses versus commodity currencies today after the release of a bunch of macroeconomic indicators in Britain. The data was not extremely positive, but apparently, markets considered it to be good enough to support the sterling.
Britain’s Office for National Statistics reported that according to the preliminary estimate gross domestic product was flat in the fourth quarter of 2019 compared with the previous three months. The actual figure matched market expectations. Month-on-month, GDP rose 0.3% in December, exceeding the consensus forecast of a 0.2% increase. Year-on-year, the economy grew 1.1% in the fourth quarter, slowing from a 1.2% rate of growth in the previous three months.
Industrial production rose just 0.1% in December from November, missing expectations of a 0.3% rise. Manufacturing production increased by 0.3% in December, but that was a slower rate of growth than 0.5% predicted by experts.
Released separately by British Retail Consortium, like-for-like retail sales were flat in January versus expectations of an increase of 0.6%. Helen Dickinson, Chief Executive at British Retail Consortium, commented on the lackluster result:

January saw a return to growth, however recent political uncertainty and a decade of austerity appear to have ingrained a more thrifty approach to shopping among consumers. Furthermore, as sustainability continues to rise up the agenda, many customers are switching to more environmentally friendly products or simply choosing to buy less.