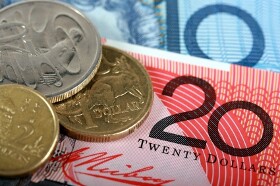 The Australian dollar continued to rise today after the business confidence improved. Other commodity currencies were trying to recover as well even though investors remained cautious as the deadly coronavirus continued to spread across China.
National Australia Bank reported that business confidence improved slightly from -2 in December to -1 in January. Business conditions remained unchanged at +3. Alan Oster, NAB Group Chief Economist, commented on the results:

The survey suggests more of the same in January. Business conditions moved sideways and there was a small improvement in confidence. While it appears conditions have stabilised after a solid decline since early-2018 they are low and suggest that activity remains weak in the business sector.

The labor market was the main source of concerns:

The concern this month is the decline in employment. It is now below average and a worry given the labour market has been a bright spot in the economic data. That said, there is a risk that ongoing weakness in business activity sees a pull-back in hiring intentions.