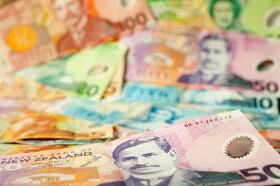 The New Zealand dollar was little changed today as local markets were closed for a holiday. The currency did not show a clear trend yesterday either after the release of mixed employment data in New Zealand.
Statistics New Zealand reported that the number of employed people remained unchanged in the December quarter of 2019 versus expectations of a 0.3% increase. Employment grew by 0.2% in the previous three months. The unemployment rate fell from 4.1% to 4.0%. It was a positive surprise to economists, who were expecting an increase to 4.2%. Wage inflation remained unchanged at 0.6%, while experts had predicted a slowdown to 0.5%.
Also released yesterday, the Caixin China Services PMI demonstrated a drop from 52.5 in December to 51.8 in January. The actual figure was slightly below the forecast value of 52.0. China is New Zealand’s biggest trading partner, therefore economic reports from the Asian nation tend to have an impact on the New Zealand currency.
New Zealand markets were closed for Waitangi Day on Thursday.
Going forward, the New Zealand currency will react to tomorrow’s release of inflation expectations from the Reserve Bank of New Zealand as well as to China’s trade balance. News about the Wuhan coronavirus will also affect the kiwi as well as the rest of the currencies.
NZD/USD traded at 0.6471 as of 9:16 GMT today after opening at 0.6473 and rising to the daily high of 0.6483. EUR/NZD was at about 1.6991 after opening at 1.6987 and falling to the daily minimum of 1.6960. NZD/JPY traded at 71.11, near the open of 71.07.