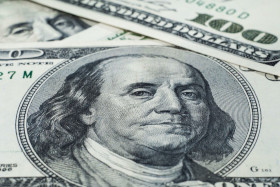 US Dollar Rises on Decline in Trade Deficit, Jobs Data

The US dollar is rising midweek on strong economic data and the rebound in global financial markets. Despite the Wuhan coronavirus significantly affecting China and spreading to other countries, traders are confident that the outbreak will be contained. The greenback is mirroring its performance from early last year as it is already up close to 2% so far in 2020.

According to the Bureau of Economic Analysis (BEA), the trade deficit jumped to $48.9 billion in December, down from the upwardly revised $43.7 billion. It is higher than the market forecast of $48.2 billion. Overall, the trade gap slipped in 2019 for the first time in six years, falling 1.7% to $617 billion. In 2018, the trade deficit hit an all-time high of $628 billion.
The latest ADP data found that private businesses hired 291,000 workers in January, the biggest surge since May 2015. Analysts had penciled in a gain of 156,000. Most of the jobs were in leisure and hospitality, education, construction, health care, and professional services.
In the week ending January 31, mortgage applications advanced 5%, down from the previous weekâs 7.2% increase, according to the Mortgage Bankers Association (MBA) numbers.
Most of the purchasing managersâ indexes (PMIs) had strong readings in January. The IHS Markit composite and services PMI came in at 53.3 and 53.4, respectively. The Institute for Supply Management (ISM)âs non-manufacturing PMI clocked in at 55.5. Also, ISM non-manufacturing business activity reached 60.9 and non-manufacturing new orders hit 56.2.
All eyes will be on the first jobs report of 2020 when the Bureau of Labor Statistics (BLS) publishes the January employment data on Friday. The market is predicting a gain of 160,000 and an unemployment rate of 3.5%.
The US Dollar Index soared 0.35% to 98.30, from an opening of 97.94, at 18:53 GMT on Wednesday. The last time the buck was this high was at the end of November.
The USD/CAD currency pair rose 0.14% to 1.3294, from an opening of 1.3278. The EUR/USD slumped 0.43% to 1.0997, from an opening of 1.1046.