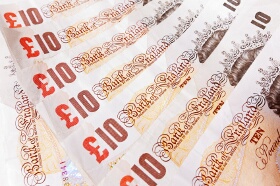 The Great Britain pound recovered a bit today following yesterday’s slump caused by returning Brexit fears. The rebound was nowhere near enough to eliminate the Monday’s losses, though. Macroeconomic data showed a small improvement in Britain’s economy.
The sterling slumped at the start of the trading week after Britain and the European Union exchanged comments demonstrating a hardline stance in trade deal negotiations. UK Prime Minister Boris Johnson said that there is “no need” for Britain to follow EU trade rules and regulations and that he wants a Canada-style free trade agreement. Meanwhile, EU chief negotiator Michel Barnier said that the “ambitious” trade deal offer required a “level playing field”.
Released yesterday, the seasonally adjusted IHS Markit/CIPS Purchasing Managers’ Index rose to a nine-month high of 50.0 in January according to the final estimate, standing exactly at the neutral level of no-change, up from December’s reading of 47.5. Market participants were expecting the final figure to be the same as the preliminary reading of 49.8. Released today, the seasonally adjusted IHS Markit/CIPS UK Construction Total Activity Index advanced from 44.4 in December to 48.4 in January, slightly exceeding the consensus forecast of 48.1. Tomorrow, Markit will release the final estimate of the services PMI.
GBP/USD advanced from 1.2994 to 1.3032 as of 13:40 GMT today, rebounding from the daily low of 1.2941. EUR/GBP dropped from 0.8509 to 0.8476, retreating from the day’s maximum of 0.8537. GBP/JPY soared from 141.20 to 142.26.