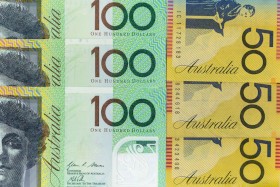 The Australian dollar rose against all other most-traded currencies today after the Reserve Bank of Australia refrained from cutting interest rates and did not signal about a cut in the immediate future.
The RBA kept its main interest rate unchanged at 0.75%. Such a decision was widely expected by market participants. The accompanying statement made optimistic remarks about the global economy:

The outlook for the global economy remains reasonable. There have been signs that the slowdown in global growth that started in 2018 is coming to an end. Global growth is expected to be a little stronger this year and next than it was last year and inflation remains low almost everywhere.

The main threats to global growth were the US-China trade spat and the coronavirus, though the central bank said that the impact of the virus and Australian bushfires should be temporary. Economists were pleasantly surprised by the fact that the bank kept the forecast of Australia’s economic growth unchanged — 2.75% for 2020 and 3% for 2021.
The statement concluded:

With interest rates having already been reduced to a very low level and recognising the long and variable lags in the transmission of monetary policy, the Board decided to hold the cash rate steady at this meeting. Due to both global and domestic factors, it is reasonable to expect that an extended period of low interest rates will be required in Australia to reach full employment and achieve the inflation target.

The RBA also said that it is ready to lower rates if necessary but did not signal about an immediate rate cut:

The Board will continue to monitor developments carefully, including in the labour market. It remains prepared to ease monetary policy further if needed to support sustainable growth in the economy, full employment and the achievement of the inflation target over time.

Despite that, analysts continued to expect a reduction in April. Westpac Banking Corporation said:

Westpac continues to expect that a combination of a more moderate growth outlook and an unexpected (by the RBA) deterioration in the labour market will require a further policy response. Our forecast is that the next rate cut will occur in April followed by a further cut in August.