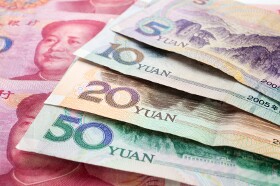 The Chinese yuan is trading sideways to start the trading week as new worse-than-expected trade data is showing bad signs for the worldâs second-largest economy. Last monthâs trade woes are leaving investors with the belief that these numbers will only worsen in the coming months.

According to Chinaâs General Administration of Customs, total exports declined 1.4% to $221.25 billion and total imports fell 10% to $164.19 billion in December. Compared to the same time a year ago, imports were down 7.6% and exports were down 4.4%.
Overall, the nationâs total trade surplus climbed $57.06 billion, beating median estimates of $51.6 billion.
Ostensibly, trade figures confirm the negative impact the US-China dispute is having on trade. Moreover, the data proves that everything is worse than what officials and the market estimated. In the end, it could result in Beijing launching an even larger and more aggressive stimulus plan to stabilize growth.
This comes as the purchasing managersâ index (PMI) found that manufacturing activity tumbled in December for the first time in 19 months. As domestic and foreign demand crater, and the growth rate of Chinese imports and exports takes a nosedive, the national economy could be in for a rough ride in 2019.
On Friday, VP Bank recently stated that traders should be more cautious about Chinese growth than the US economy right now, citing âclear signsâ of a greater slowdown. As the tariff battle potentially intensifies, growth will be âa bit more difficultâ to attain for Beijing.
Felix Brill, the head of investment solutions at Liechtenstein-based institution, noted that the country could get through the storm.

This is some cause for concern in the short term, but I’m confident that the Chinese authorities, again, will step in and implement additional measures to support the economy.