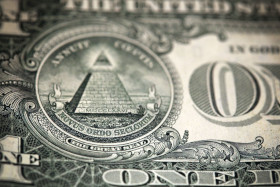 US Dollar Rebounds on Comments of Fed Chair Powell

The US dollar gained against its most-traded rivals today following yesterday’s losses caused by dovish monetary policy minutes released by the Federal Reserve. Market analysts explained the rebound by comments from Fed Chairman Jerome Powell.
Yesterday, the Fed released minutes of its December monetary policy meeting. Markets considered the notes to be more dovish than expected. In particular, the central bank hinted that it can be patient with further interest rate hikes:

With an increase in the target range at this meeting, the federal funds rate would be at or close to the lower end of the range of estimates of the longer-run neutral interest rate, and participants expressed that recent developments, including the volatility in financial markets and the increased concerns about global growth, made the appropriate extent and timing of future policy firming less clear than earlier. Against this backdrop, many participants expressed the view that, especially in an environment of muted inflation pressures, the Committee could afford to be patient about further policy firming.

But he also said that the Fed will reduce its balance sheet. Markets considered the comment to be hawkish, indicating that the Fed may continue monetary tightening even without raising borrowing costs.
James Bullard, President of the Federal Reserve Bank of St. Louis, also was speaking today. He was more dovish, saying that “the current stance of monetary policy may be too hawkish.” He also voiced an opinion that “window of opportunity has now closed” for normalizing short-term interest rates.
EUR/USD dropped from 1.1542 to 1.1499 as of 21:17 GMT today. GBP/USD declined from 1.2788 to 1.2746. USD/JPY rose from 108.15 to 108.47, bouncing from the daily low of 107.77.