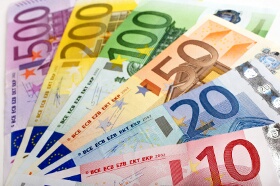 The EUR/USD currency pair today traded mostly in a tight range after heading lower in the Asian session and the early European session, before heading higher after the release of the German ZEW survey data. The pair’s initial downtrend was largely triggered by news that Congress had resolved the US government shutdown, which triggered a slight recovery in the greenback.

The EUR/USD currency pair today traded in a 50-point range having hit a low of 1.2223 in the early European session and a high of 1.2276 in the early American session.

The upbeat German ZEW Economic Sentiment Index for January contributed significantly to the pair’s subdued rally as the the current situation assessment came in at 95.2, which was way higher than the expected 89.5 print. The German investor sentiment rose to 20.4, which was higher than the consensus estimate of 17.7. The Eurozone ZEW economic sentiment survey came in at 31.8, slightly higher than the previous 29. The International Monetary Fund also said that it expects the Eurozone growth to increase by 0.3% to 2.1% this year and 2.0% in 2019.

The release of the upbeat flash Eurozone consumer confidence data release by the European Commission at 15:00 GMT triggered a further rally in pair to a new highs of 1.2289. The recovery in the US dollar took a backseat as the US Dollar Index hit a low of 90.15 at the time of writing.

The currency pair’s future performance is likely to be affected by the release of flash Eurozone PMIs scheduled for tomorrow morning.