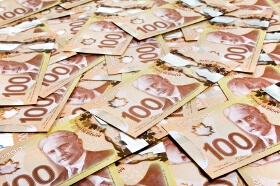 The USD/CAD currency pair today declined slightly from multi-month highs that had been registered earlier after the release of Canadian GDP data by Statistics Canada. The currency pair had rallied higher briefly after the announcement of both the Canadian and US GDP data before retracing some of its daily gains.

The currency pair rallied to hit a new daily high after the announcement of the Canadian and US GDP data, which were simultaneously released.

Canada’s Gross Domestic Product was recorded at an annualised figure of 2.5% for the month of February as opposed to the expected 2.6% and the previous 2.3%. Canada’s industrial product price index for the month of March came in at 0.8%, which was higher than the expected and previous figures of 0.3%. The Canadian dollar was also strengthened by higher crude oil prices as the West Texas Intermediate recording an increase of about 1.0% during intra-day trading.

The US GDP data released by the Bureau of Economic Analysis indicated that the American economy had grown at its slowest rate in three years over the first quarter of 2017. The US GDP recorded an annualised increase of 0.7% in the quarter under review as opposed to the expected 1.0% and the previous 2.1%. The University of Michigan confidence index also came in at 97, which was below the market expectation of 98.

The release of Canada’s Markit manufacturing PMI and the US personal consumption expenditure, both scheduled for Monday, is likely to impact the currency pair’s future performance.