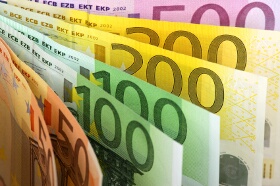 The EUR/USD currency pair today declined significantly during Mario Draghi‘s speech as the European Central Bank maintained interest rates at the same level. The currency pair dipped as the US dollar strengthened against the single currency due to higher US bond yields.

The currency pair lost about 80 points as Mario Draghi, the ECB President, delivered his speech and largely outlined a dovish outlook.

The currency pair spiked to a new daily high at the start of Mario Draghi‘s speech before tumbling to a new low after it emerged that the European Central Bank had not revised its policy outlook. Although the rate decision did not surprise the markets even as the ECB maintained its zero interest rate policy while keeping its marginal lending facility at 0.25%, and its deposit facility rate at -0.40%, investors were disappointed by the ECB’s dovish policy outlook. The ECB also announced that it would reduce its asset purchases to â¬60 billion and extend the program to December 2017.

The decline lost momentum as the greenback, which is tracked by the US Dollar Index, started losing strength due to declining US bond yields, and disappointing US macro data. The US weekly initial jobless claims exceeded expectations by coming in at 257,000 versus the expected 245,000.

The currency pair is likely to be affected by the release of the Eurozone CPI data scheduled for 9:00 GMT tomorrow.