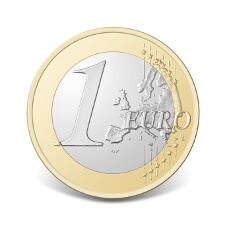 The EUR/USD currency pair declined today following the uncertainty surrounding the French presidential election after the second election debate where Marine Le Pen gained against Emmanuel Macron. The pair also traded much lower after the release of the US ADP Employment Change report, which beat expectations and significantly boosted the greenback.

The currency pair had lost over 30 points at the height of its decline and has been trading in negative territory for the better part of the day.

The currency pair has largely declined today given the markets uncertainty regarding the French presidential election as an IFOP poll indicated that Marine Le Pen had gained 1 point against Emmanuel Macron after last night’s presidential debate. Marine Le Pen’s voting rate had increased to 40.5% after the debate from yesterday’s 39.5%. The currency pair was also negatively affected by the release of the Markit Eurozone Services PMI and the Markit Eurozone Composite PMI, both of which did not meet expectations.

Furthermore, the currency pair was weakened by the stronger US dollar due to the release of the US ADP Employment Change report, which was recorded at 263,000 versus the expected 185,000. The disappointing US ISM Services/non-manufacturing composite data did not affect the greenback’s strength.

The currency pair’s future performance is likely to be affected by the release of Markit Germany retail PMI and Mario Draghi‘s speech in Frankfurt, both scheduled for tomorrow.