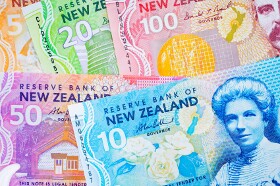 The Reserve Bank of New Zealand refrained from an interest rate cut yesterday after slashing rates last month but signaled about possibility of an additional cut in the future. As a result, the New Zealand dollar sank during the previous trading session, though the currency is attempting to recover during the current session.

The RBNZ voiced concerns about developments in both New Zealand and global economies. Additionally, the central bank complained about the exchange rate of the New Zealand currency, saying that “a further depreciation in the exchange rate is appropriate.” The bank concluded the statement with the outlook for further monetary easing:

Some further policy easing may be required over the coming year to ensure that future average inflation settles near the middle of the target range.

Supporting the kiwi was the surprisingly good trade balance report. New Zealand’s trade deficit shrank to NZ$53 million in December from NZ$799 million in November, being below the average forecasted level of NZ$130 million.