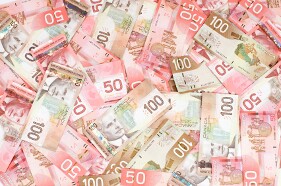 The Canadian dollar gained today, extending its rally versus the US dollar and the Japanese yen for the third straight session. The reason for the admirable performance was the surprise rally of crude oil.

Forecasts of cold weather in the United States and Europe promise higher demand for heating oil. As a result, crude oil prices snapped their decline, surging during the Friday’s trading session.

As for Canada’s economic data, retail sales were very good, exceeding forecasts by a wide margin. The Consumer Price Index (not adjusted for seasonal variations), on the other hand, fell more than experts had predicted.

The monetary policy outlook provided additional support for the Canadian dollar. While previously economists were counting on an interest rate cut from the Bank of Canada, now it looks like Governor Stephen Poloz is too afraid to do so due to potential negative consequences of the currency’s slide on Canada’s economy.