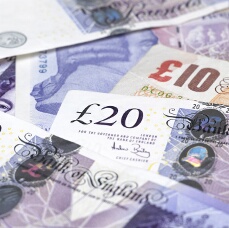 The Great Britain pound rallied today following a positive report about house prices and the monetary policy decision made by the Bank of England. The currency dropped to the lowest level since July 2013 against the US dollar intraday but bounced to the opening level as of now.

The BoE decided to keep its monetary policy unchanged at today’s meeting. The central bank announced:

As for economic data, the Halifax House Price Index rose 0.9 percent in December, three times the predicted rate of 0.3 percent.