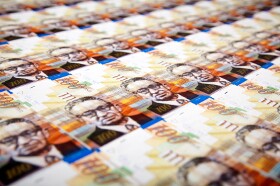 The Israeli new shekel fell against the US dollar today even though the nation’s central banks decided to keep its main interest rate unchanged at yesterday’s monetary policy meeting as the outlook for Israel’s economy was relatively positive. The currency gained on the euro.

The Bank of Israel decided to keep its benchmark interest rate at 0.25 percent. It looks like the previous interest rate cuts had an effect and the nation’s economy is on track for recovery. Indeed, the bank noted in the statement:

Indicators which became available this month point to a recovery in activity after Operation Protective Edge, with the economyâs expected return to its path of growth from before the operation expressed in a relatively high growth rate in the coming quarters.

Still, the economy was heading to slowest annual growth since 2009 as gross domestic product shrank for third quarter. The economic decline occurred as the conflict in Gaza scared away tourists and hurt production. As a result, experts do not expect the central bank to raise rates next year.

If you have any questions, comments or opinions regarding the Israeli New Shekel,
feel free to post them using the commentary form below.