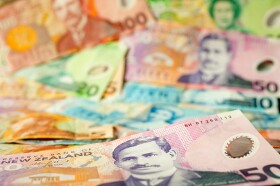 The New Zealand dollar rallied today after the Reserve Bank of New Zealand decided overnight to keep its key interest rates unchanged. While the currency came down from its high for the day against the US counterpart, it remains above the opening level.

The RBNZ decided to keep its Official Cash Rate at 3.5 percent. Governor Graeme Wheeler said in the statement about the world’s economic growth:

The global economy continues to grow at a moderate pace, though recent data suggest a softening in major economies other than the United States.

Regarding domestic growth, Wheeler was rather optimistic:

Growth is expected to remain at or above trend through 2016, with unemployment continuing to decline. Modest inflation pressures suggest the expansion can be sustained for longer than previously expected with a more gradual increase in interest rates.

At the same time, the Governor was unhappy with the strength of the New Zealand dollar:

The exchange rate does not reflect the decline in export prices this year and remains unjustifiably and unsustainably high. We expect to see a further significant depreciation.

While such comments were detrimental to the currency, it still rallied due to the outlook for higher borrowing costs:

Some further increase in the OCR is expected to be required at a later stage.