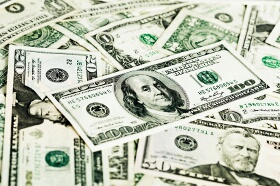 US Dollar Expected to Strengthen on Currency Wars

It looks as though another round of currency wars is expected from central banks as countries try to stimulate their economies by weakening their currencies. One of the exceptions to this move, though, is likely to be the US dollar. With the US economy strengthening recently, it is unlikely that the greenback will be a part of the next race to the bottom.

Many central banks are moving to take measures designed to stimulate the economy and weaken the local currency. The Bank of Japan recently increased its quantitative easing program, and the ECB is expected to ease further soon as well, since Mario Draghi repeatedly says that the euro must be saved at all costs. And, even though the Bank of England has yet to introduce more easing measures, policymakers are far from being ready to allow an end to quantitative easing.

All of this leaves the United States alone to allow its currency to strengthen. Asset purchases have been tapered off, and many expect interest rates to rise sometime next year. As other currencies vie for weakness, the US dollar will likely become stronger.