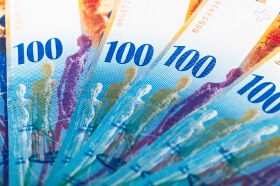 The Swiss franc fell initially today after yesterday’s referendum resulted in no change to the central bank’s regulations. The currency gained ground right now, rising against its major peers, including the US dollar and the euro.

Among topics for voting on the referendum was the legislation that would increase the minimum share of central bank’s reserves that should be allocated in gold. Experts speculated that such rule would make it difficult for the Swiss National Bank to maintain the cap on the franc. The currency dipped after the voters rejected the idea but managed to bounce later. Gold followed the same pattern.