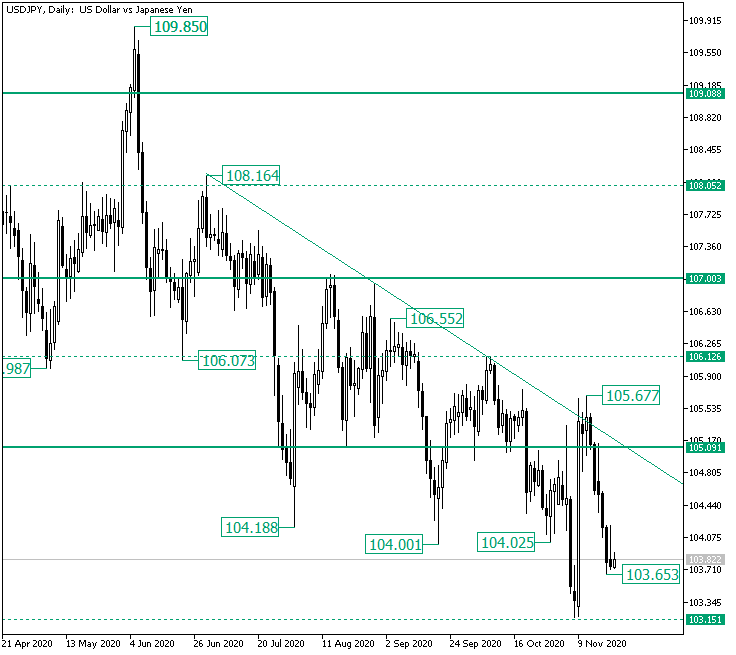 The US dollar versus the Japanese yen currency pair seems to be under a lot of bearish pressure. Do the bears hold any chance until 103.15?

Long-term perspective
From the high of 109.85, the fall extended — in a fist instance — until the 106.07 low. From there, it rallied to the 108.16 high, which would become the resistance trendline of the descending trend.
From 108.16 onwards, the price oscillated under the trendline, extending a hair away from the 103.15 intermediary support level.
However, the surprise was that from 103.15, the price managed a strong appreciation, one that retook the price back and way above the 104.18, 104.00, and 104.02, respectively, lows.
So, for the complete picture, the mentioned lows were “deemed” as impenetrable. Yet, the fall did take them out, but the long white candle seemed to have fixed the situation.
Still, the appreciation was stopped in its tracks by the double resistance area defined by the trendline and the 105.09 high, topping at 105.67.
As a result, the bears took over and sent the pice back beneath the three lows, thus spoiling — for the time being — the bullish dream.
So, unless the bulls revalidate the lows as a support area, which would target 105.09, the fall has room to continue until the 103.15 level.
If 103.15 cedes, then the fall may extend until the 101.42 level — not highlighted on the chart.

Short-term perspective
After the fall from the 105.34 peak, which sent the price very close to the 103.09 intermediary level, the bulls recovered, sending the price above the double resistance area noted by the upper line of the descending channel and the 105.27 intermediary level.
But the peak of 105.67 was all that the bulls could do, as the price resumed the drop. As long as the fall from 105.67 continues, 103.09 is the main target.
On the flip side, if the bulls accomplish to get the price above 104.44. then they could hope for 105.27.