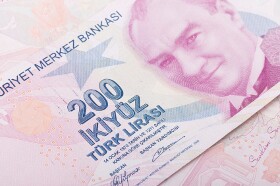 The Turkish lira is enjoying its best rally in months as the government eased two-year-old currency trading limits, giving the lira a substantial boost. It is also rising against several currency peers as foreign exchange markets bet that the country would embrace a more orthodox monetary policy following a series of noteworthy exits in President Recep Tayyip Erdoganâs government.

According to a statement from Ankaraâs chief banking regulator, the amount of currency swaps and derivative deals that local lenders can execute with foreign counterparts has been increased. Effective immediately, the number of lira financial institutions can sell to foreign entities rose from 2% to 5% of their equity that will mature in seven days. The cap was also elevated from 5% to 10% for those maturing in a month, and 20% to 30% for those maturing in a year.
The purpose behind the move is to encourage foreign investors to hold more lira through US dollar swaps, with policymakers calling it a ânormalizationâ of the market. The limits have been in place since a currency crisis in 2018, resulting in multiple liquidity crunches.
Due to the coronavirus-induced global financial crisis and central bank mismanagement, non-Turkish investors have removed more than $13 billion from the nationâs stock and bond markets this year.
Could Turkey embrace more orthodox fiscal and monetary policy? Market analysts think that this could occur following the resignation of Finance Minister Berat Albayrak and the termination of central bank Governor Murat Uysul. President Erdogan quickly announced that former Deputy Prime Minister Lutfi Elvan would act as the treasury and finance chief, and Naci Agbal would become the head of the Central Bank of Turkey.
This has resulted in investors betting that Ankara would raise interest rates at next weekâs policy meeting. Last month, officials held off on a rate hike, leaving the benchmark repo rate at 10.25%. Economists are forecasting that rates could surge to as high as 15%. They are also expecting that Turkey could start filling up its forex reserves again, but the consensus is that investors will need patience.
In the meantime, local traders will be paying close attention to any additional political appointments until the November 19 meeting.
On the data front, the unemployment rate dipped from 13.4% in July to 13.2% in August. The current account deficit diminished from -$4.316 billion in August to -$2.364 billion in September.
The USD/TRY currency pair tumbled 4.25% to 7.7993, from an opening of 8.1517, at 16:55 GMT on Wednesday. The EUR/TRY fell 4.52% to 9.1891, from an opening of 9.6254.
If you have any questions, comments, or opinions regarding the Turkish Lira, feel free to post them using the commentary form below.