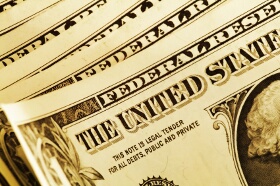 The US dollar is plunging against most of its currency rivals on Thursday as the number of Americans filing for first-time unemployment benefits declined to a pandemic low. With the 2020 US presidential election looking a little more certain in former Vice President Joe Bidenâs favor, the broader financial markets are rallying, which has sparked a selloff of the greenback. Will a lower dollar be the norm in the home stretch of 2020?

According to the Department of Labor, the number of first-time unemployment benefits fell to a coronavirus pandemic low of 751,000 in the week ending October 31. While this is down from last week’s revised 758,000 reading, it came in higher than the market forecast of 738,000. Continuing jobless claims declined to 7.285 million, while the four-week average slipped to 787,000.
Moreover, nearly 363,000 people applied for benefits from a temporary federal-relief program that expires by the yearâs end. In total, the number of Americans receiving benefits from eight federal and state programs decreased by 1.15 million to 21.5 million.
But while the labor situation is improving gradually, the trend in initial claims is above the 665,000 peak that was seen following the financial crisis in 2008.
On Friday, the October jobs report will be released, and it is projected to show an increase of 530,000 new jobs and an unemployment rate of 7.7. If accurate, this would be down from the 661,000 gain in September. In total, about half of the 22 million jobs lost in March and April have been recovered.
In other data, unit labor costs fell 8.9% in the third quarter, while non-farm productivity rose 4.9% during the July-to-September period. Total motor vehicle sales dropped from 16.3 million in September to 16.2 million in October.
The Federal Reserve will complete its two-day November policy meeting. The US central bank is anticipated to leave its interest rates unchanged at 0.25%, while also keeping its unprecedented quantitative easing campaign the same. The Eccles Building is likely to encourage greater fiscal stimulus and relief spending to support the economic recovery and cushion the blows from the coronavirus-induced crisis.
With financial markets rallying for the second straight day after the 2020 presidential election, the greenback is weakening again. The US Dollar Index, which measures the greenback against a basket of currencies, cratered 0.78% to 92.68, from an opening of 93.34. The index is on track for a weekly loss of 1.4%, adding to its year-to-date decline of 4%.
The USD/CAD currency pair tumbled 0.55% to 1.3063, from an opening of 1.3136, at 13:59 GMT on Thursday. The EUR/USD surged 0.96% to 1.1835, from an opening of 1.1724
If you have any questions, comments, or opinions regarding the US Dollar, feel free to post them using the commentary form below.