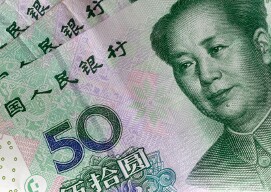 The Chinese yuan paused its rally last week after touching a 52-week high of 6.75 against the US dollar. The yuan is looking to restart its push against the greenback to kick off the trading week, driven by additional liquidity in the banking system and a recovering economy. Can the yuan maintain its upward trajectory?

On Monday, the People’s Bank of China (PBoC) announced that it would inject $5.86 billion into the Chinese market through reverse repurchasing operations at an interest of 2.35%. The central bank said in an online statement that the purpose is to maintain ample liquidity volumes in the banking system to finish the third quarter of 2020.
A reverse buyback is when the central bank acquires securities from commercial institutions with an agreement to resell the securities in the future.
Officials have been engaging in weekly money pumping for the last two months. This move coincided with the yuanâs strong performance on foreign exchange markets, suggesting that investors are confident that the authorities will prevent the system from going through another steep downturn.
That said, Reuters is reporting that Chinese leaders are set to endorse a lower economic growth forecast for the worldâs second-largest economy over the next five years. As Beijing goes through a myriad of challenges â at home and abroad â President Xi Jinping and his Communists will approve a 2021-to-2025 economic and social development blueprint.
The newswire notes that government think tanks and economists have recommended an annual gross domestic product (GDP) growth target of between 5% and 6%, while China is putting a bullseye on an average annual growth rate of more than 6.5% for the 13th five-year plan that finishes in 2020.
The State Councilâs Development Research Centre, the cabinetâs think tank, said in a recent report:

The 14th five-year plan period will be a critical period for China to deal with frictions with the United States and make strategic arrangements.

On the data front, year-to-date industrial profits tumbled 4.4% in August year-over-year. All eyes will be on manufacturing and non-manufacturing purchasing managersâ index (PMI) readings for September. Early estimates suggest that these numbers will show expansion, but they will also highlight a sluggish pace in the broader economic recovery.
The USD/CNY currency pair tumbled 0.16% to 6.8128, from an opening of 6.8238, at 14:23 GMT on Monday. The EUR/CNY advanced 0.16% to 7.9501, from an opening of 7.9378.
If you have any questions, comments, or opinions regarding the Chinese Yuan, feel free to post them using the commentary form below.