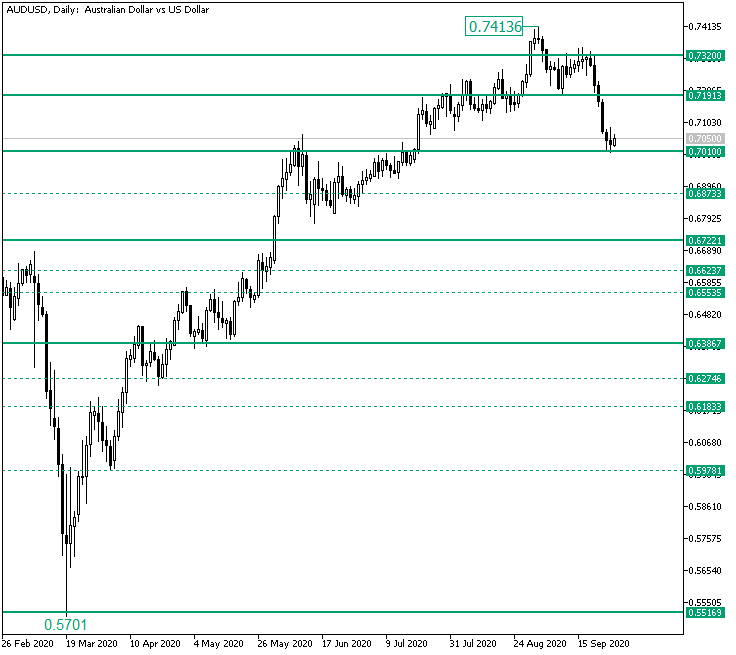 The Australian versus the US dollar currency pair seems to be in bearish hands. Are the bulls anywhere near?

Long-term perspective
The appreciation from the 0.5701 low climbed to as high as 0.7413. From there, it retraced under the 0.7320 firm resistance area, which rendered the price-action as a false break.
On September 9, a bullish engulfing was printed after the price was repelled by 0.7191.
However, the facts that the pattern materialized after a false break and very close to the responsible level were ominous for the bullish advancement.
As a result, further rise was limited by the 0.7320 zone. So, after striving, without any success, to set itself above 0.7320, the price ebbed, piercing the support that favored the formation of the engulfing pattern and reaching the 0.7010 area.
In the current context, one possible scenario is for the price to continue a consolidation phase that unfolds over a short time-span, such as a flag or pennant. When the pattern fulfills its mission, the 0.7010 level will cede, turning the 0.6873 into an intermediary target, and 0.6722 into the main one, respectively.
Another scenario is the one in which a throwback occurs, one that could reach — or stop before — 0.7191. Once this throwback is over, yet another fall could emerge, one that, after it pierces 0.7100, has the same objectives as the previous scenario.
Only if the bulls regain 0.7191, then they could hope for 0.7320 once more.

Short-term perspective
The fall that started after peaking at 0.7345 stopped upon reaching the 0.7002 level.
The following pullback was limited by the 0.7081 intermediary level, which aided a new downward leg that defined a lower low that ceased a hair away from the same 0.7002.
So, it can be considered that the price is contained within a range limited by 0.7081 and 0.7002.
If the bulls win, then they could reach 0.7170. On the flip side, if the overall momentum resumes, then 0.6949 is to be paid a visit.