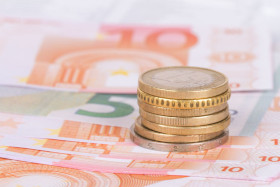 Euro Falls Against US Dollar on Risk-Off Mood, Later Recovers

The  euro today fell against the  US dollar driven by  the  risk-off investor sentiment, which has been persistent this week triggering a  selloff in  riskier assets. The  EUR/USD currency pair’s decline was also fueled by  the  weak German IFO survey data released earlier today combined with the  greenback’s overall strength.
The  EUR/USD currency pair today fell from a  high of  1.1679 during the  Asian market to  a  low of  1.1626 in  the  early American session but was trading at  breakeven at  the  time of  writing.
The  currency pair’s initial decline was fueled by  the  weak investor risk appetite, which saw investor sell the  single currency while buying the  safe-haven dollar. The  release of  the  disappointing German IFO business climate index for  September, which came in  at  93.4 versus the  consensus estimate of  93.8 also drove the pair lower. The  current assessment print also missed expectations. There was immense bearing pressure on  the  pair as  the  number of  put options on  the  EUR/USD hit fresh 3-month highs today showing that professional traders were net short. The  release of  the  European Central Bank‘s economic bulletin could not stop the  pair’s decline.
The  release of  the  latest US initial jobless claims report by  the  Department of  Labor helped the  pair stop its losing trend as  the  claims rose to  870,000 versus the  expected 840,000 print. The  pair rallied then higher during the  Fed Chair Jerome Powell‘s speech.
The  currency pair’s future performance is likely to  be affected by  market sentiment and  macro releases.
The  EUR/USD currency pair was trading at  1.1659 as  at  16:42 GMT having recovered from a  low of  1.1626. The  EUR/JPY currency pair was trading at  122.96 having risen from a  low of  122.97.
If you have any questions, comments, or opinions regarding the Euro, feel free to post them using the commentary form below.