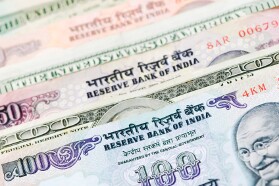 The Indian rupee is slumping to a one-month low against the US dollar, driven by a bleak forecast for the developing countryâs economy in 2020. But while market observers are anticipating an economic contraction, officials are looking ahead and expecting improvements across the nation. But could the rupee threaten its gains over the last few months?

The United Nations Conference on Trade and Development (UNCTAD) published a new Trade and Development Report for 2020. It stated that the global economy is facing a deep recession due to the coronavirus pandemic. As a result, the report noted that the world economy would plunge 4.3% this year.
Specifically, India’s economy will decline by 5.9% in 2020 amid the still-unchecked public health crisis. But it does think India’s gross domestic product (GDP) will recover 3.9% in 2021.

In short, the world is grappling with the equivalent of a complete wipeout of the Brazilian, Indian and Mexican economies. And as domestic activity contracts, so goes the international economy; trade will shrink by around one-fifth this year, foreign direct investment flows by up to 40 per cent and remittances will drop by over USD 100 billion.

In the case of India, the baseline scenario is a sharp recession in 2020 as strict lockdown measures to stem the virus’ spread brought many productive activities to a halt across the country.

This comes soon after Moody’s Investors Service prognosticated an 11.5% contraction for this fiscal year.
India’s Ministry of Finance has likely conceded to a recession that would span two years, but it thinks the economy can rebound in 2022, with a tamed virus outbreak and the right concoction of fiscal and monetary stimulus tools. The government is projecting that the GDP would explode between 19% and 21% by 2022.
On the data front, India will release its foreign exchange reserves, infrastructure output, debt, and bank loan growth data to finish the month.
India has still failed to contain the number of new infections. Its latest single-day increase topped 75,000, increasing the total number of confirmed cases to just below six million and a death toll of about 90,000.
The USD/INR currency pair rose 0.02% to 73.5328, from an opening of 73.5165, at 13:43 GMT on Wednesday. The EUR/INR slipped 0.1% to 85.9900, from an opening of 86.0800.
If you have any questions, comments, or opinions regarding the Indian Rupee, feel free to post them using the commentary form below.