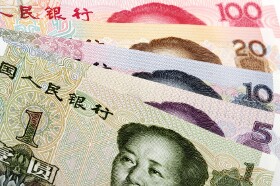 The Chinese yuan is continuing to make gains against the US dollar on Tuesday ahead of the manufacturing and non-manufacturing purchasing managersâ index (PMI) readings. The yuan, which had cratered to as low as 7.17 against the greenback, has been one of the top-performing Asian currencies this year, advancing nearly 3% year-to-date. Could the yuan defy market expectations even more?

On Monday, the Peopleâs Bank of China (PBoC) left its benchmark lending rate for household and corporate loans. For the fifth consecutive month, the one-year loan prime rate (LPR) stood at 3.85%, and the five-year LPR remained at 4.65%. LPR is used for most new and outstanding loans, and the five-year LPR typically determines the pricing of mortgages.
A recent snap Reuters poll of 35 analysts and traders did not anticipate the PBoC to change both LPRs. The LPR serves as a reference rate that is set each month by 18 banks. In August 2019, the central bank modified the LPR by loosely tying it to the medium-term lending facility rate.
Recently, the central bank kept its medium-term lending facility (MLF) unchanged for the fifth straight month. The MLF generally influences the LPR. Moreover, $88.5 million of liquidity was transferred into the market through the MLF and $29.5 billion had matured.
The PBoC said in a statement:

When the financing costs of companies start decreasing, the LPR will start dropping continuously for a certain period. As a result interest repayment costs will also decline for companies.

This comes as the PBoC injected a net $31.1 billion of liquidity in the Chinese banking system through open market operations for the week ending September 18. The central bank pumped $70.8 billion into the markets via reverse repo operations, while $91.45 billion of reverse repo agreements matured.
The USD/CNY currency pair fell 0.37% to 6.7799, from an opening of 6.8052, at 17:13 GMT on Tuesday. The EUR/CNY declined 0.9% to 7.9389, from an opening of 8.0114.
If you have any questions, comments, or opinions regarding the Chinese Yuan, feel free to post them using the commentary form below.