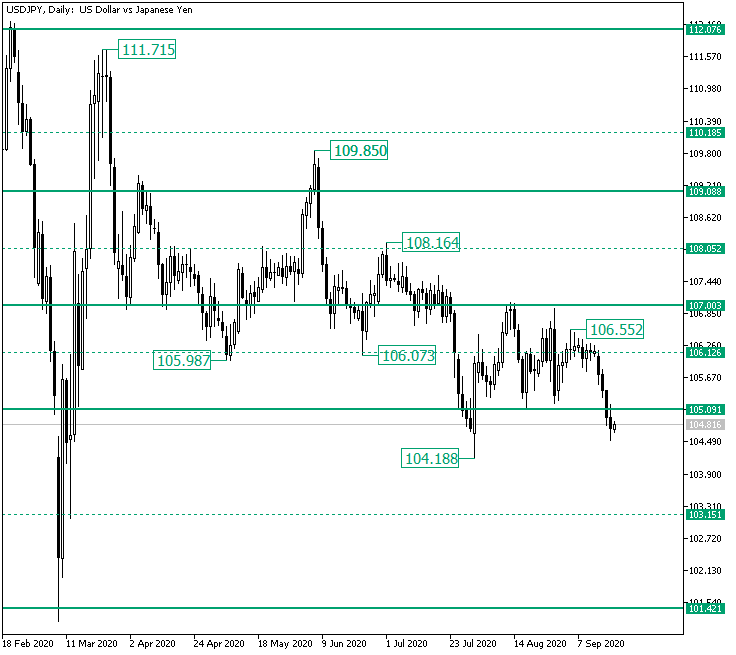 The US dollar versus the Japanese yen currency pair fell under the major 105.09 support area. Can the bulls still recover?

Long-term perspective
Starting with the 111.71 high, which came after the sharp rally that validated the 101.42 support level, the currency pair has been under constant bearish pressure.
The bearish presence can be observed, first of all, by checking the lower highs and — except for 106.07 — lower lows that the market drew.
Secondly, firm levels that could rotate the price and send it towards the north acted more as resistances — even aiding false piercings, such as 109.85 — and failed as supports.
And this unfolding seems to continue, as, after the false piercing of the 105.09 level which etched the 104.18 low, the price recovered only to draw a flat — limited by 107.00 as resistance — the support of which gave way.
In this context, the first possible scenario is the one in which 105.09 remains resistance. This may materialize after a throwback, or after a short-lived consolidation phase, such as a flag or pennant. For such a scenario, the previous low of 104.18 acts as an intermediary profit taking area, while 103.15 is the main one.
On the other hand, if the bulls do recover, then the validation of 105.09 as support would have the intermediary level of 106.12 as an aim.